A few days ago, I explored the issue of fake news — tracing its development; how algorithms, Google, Facebook and social media, in general, abetted its spread; how it was politicized; as well as its impacts on journalism, democracy and society.

In this piece, my goal is to explore the current initiatives in place to combat fake news. I’m also including some tips to help you differentiate fake news from legitimate sources. This is important if we are to encourage a society of critical thinkers whose opinions are founded on truths rather than fiction.

The Internet and social media have redefined the way we source and consume news and information. Gone are the days when we read a newspaper over breakfast, or while on the train on the way to the office. Now, we get updated on what’s happening through our computers, gadgets and smartphones.

I oftentimes get my dose of breaking news on Twitter or Facebook. Sometimes I don’t even get to read the entire news story, I just glance at the headlines. If it’s interesting enough, I’ll click on the link to access the story. I’m even guilty of not reading the entire article sometimes. This behavior isn’t limited to me or the people I know. Data from the Pew Research Centre supports the idea that this behavior has become the norm.

According to its study titled “How Americans Encounter Recall and Act Upon Digital News,” there are two common pathways that Americans use to get their online news — news websites and social media, at 36 percent and 35 percent, respectively. 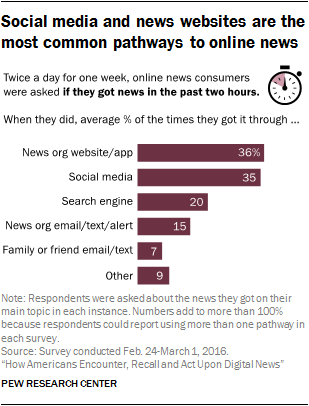 Fortunately, social media giants Google, Facebook, and Twitter have recognized their roles in aiding the spread of fake news. Reacting to pressure from governments and civil society groups, they’ve set up their own measures to fight against fake news. These measures include the following:

In my first article on this subject, I wrote how teenagers in Macedonia profited from running fake news websites that featured controversial and fake news reports about the 2016 U.S. presidential campaign. Google has subsequently cracked down on these websites and released a statement that it is “continually working to improve our algorithms.”

1) to improve search rankings through changes and improvements in its algorithms;

2) to give users the ability provide direct feedback by flagging content that appears in Google’s Autocomplete and Featured Snippets; and

3) ensuring greater transparency by providing users with more information on how its “content is crawled, indexed, and then associated with specific search queries.”

Facebook rolled out various projects to reduce the spread of misinformation.

2) providing an easier platform for people to report fake news;

5) enhancing the related articles function to show the context of specific stories;

7) listening to journalists and news organizations (although Facebook continues to face criticisms on its fake news policies, with some quarters blaming the business for not doing enough).

Early this year, Twitter announced that it was contacting its 678,000 users who may have received Russian propaganda. This came as a result of U.S. Congress’ scrutiny on the role played by social media giants in the widespread misinformation alleged to have been perpetrated by the Russians during the 2016 U.S. presidential elections.

Aside from the work being done by Google, Facebook and Twitter, there are a host of other organizations and networks that have launched their own campaigns and initiatives against fake news. These include the Poynter International Fact Checking Network in the United States; WikiTribune, a platform of journalists and volunteers; Cross Check in France which is an effort of newsrooms and students; the Indonesian Cyber Media Association which promotes accurate journalism, the Atlantic Council’s Digital Forensic Research Lab in Europe which exposes disinformation, among others.

Fake news stops with us.

The key in the fight against the spread of fake news is individual vigilance. This is critical because a U.S. post-election survey showed that “3,015 American adults suggested that it is difficult for news consumers to distinguish fake from real news.” This finding is backed by an Ipsos Public Affairs survey which indicated that “fake news headlines fool American adults about 75 percent of the time.”

Related Post: What a Trump Presidency Means for the Fight Against Climate Change

So how can ordinary individuals spot fake news? Here are my top five tips:

Is the news or information coming from a credible news source? Even if the site is splashed with logos of a news organization, you’ll still need to check the URL to make sure it’s not a fake news site. For example, the legitimate website cnn.com should not be confused with cnn.com.co. Also, check the text for typos or grammatical errors and the quality of the photos. Blurry photos and spelling errors are oftentimes indicative of fake news sources.

A legitimate story is usually carried by more than one news source. Check if the story has also been reported by news sites such as CNN, BBC, Al-Jazeera, Reuters, AP and other mainstream news sources.

Tip #3: Do not take headlines at face value.

A lot of fake news stories employ click-bait or controversial headlines to entice you to click and read. If you do click, take the time to read the story and assess its content. If the headline is too sensational, it’s likely fake news unless the story is supported by other credible news sources.

News reporters often build their articles by including references to research and surveys as well as citations from various experts. Double check these sources to confirm legitimacy. The expert may not necessarily exist, or credentials overly exaggerated. In addition, the accompanying photo may have been photoshopped or taken from another time or context or country.

Some apps and browser extensions are now available which help to identify fake news. These include fact-checker PolitiFact, and Chrome extensions B.S. Detector, Fake News Alert and FiB.

For more tips on spotting fake news, watch this video from FactCheck.org:

Have you fallen for fake news? Do you have additional tips to help determine fake news? Feel free to share below.